“Kids are the most efficient learners in the world. They learn so much so fast when they are motivated, and when they aren’t, nothing happens.” 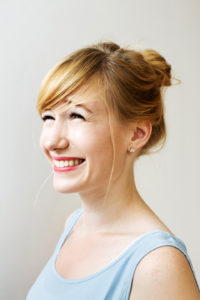 When Linda Liukas started programming in 2009, she wondered whether she could help make coding more approachable and fun for kids. She never dreamed that the doodles she created in her sketchbook would later become the basis for Hello Ruby, a beautifully illustrated children’s book for 5-7 year olds. Filled with engaging short stories and personable characters, the book gently introduces computer science concepts without delving into any of the technical aspects of programming.

In two revealing interviews, Liukas provided insight into her creative process and shared thoughts on how parents can introduce their children to the world of programming.

Hello Ruby is a book about a little girl named Ruby who travels around the world and solves problems with her friends. For example, there’s the Snow Leopard, who’s very beautiful but doesn’t want to play with the other, messy kids. In a way she’s a representation of Apple. There are the Androids, and the Firefoxes, and a slew of other quirky characters, because for me, technology is very profoundly human.

I’ve always seen the human aspect of technology—stories within the world of technology and programming, and for some reason, other people always see it as very cold and mechanical and number-oriented. But it’s not, it’s about words and people and interactions and logic. Logic can be beautiful too.

Liukas observed in the book’s Kickstarter campaign that “illustrations are as important as the story.” Her careful attention to detail is evident throughout the book in the gorgeous artwork on every page.

As an early employee at Codecademy, a technology startup company that teaches people to code, Liukas learned how to create programming lessons using instructional technology. But she isn’t convinced that technology is the only way to teach children about programming.

I believe stories are the most formative force of our childhood. The stories we read growing up affect the way we perceive the world as we grow up. For some reason narratives haven’t been used as part of technology education, even though a lot of research suggests that stories are the best way to understand new concepts, especially in childhood but also when adults. So for me it was a natural fit. When I started drawing Ruby’s adventures, I began to see stories and characters everywhere in the technology world.

However, such a huge part of our daily lives is spent in front of a screen. I believe there’s a lot of value in parents and children exploring and interacting offline. That’s why Hello Ruby is aimed for 5-7 year olds to be read together at bedtime with the parent — kids who don’t necessarily read or write yet on their own. And there’s a wealth of knowledge about computers and computing concepts we can teach to the little ones before even opening the terminal.

Liukas’ emphasis on exploring and interacting offline may seem to contradict the ultimate goal of teaching kids to code, but it’s strikingly similar to the principles of Waldorf education. As noted in a New York Times article about a Waldorf school in Silicon Valley, the Waldorf method utilizes a non-technical approach to education. Many Waldorf schools don’t provide computers for children to use, and they generally frown upon children using electronic devices at home.

Her advice to parents hoping to teach their kids to code? Find a way to motivate them.

Kids are the most efficient learners in the world, they learn so much so fast when they are motivated, and when they aren’t, nothing happens. Find out what motivates that specific kid, and what makes them interested in technology. Maybe it’s making a game, maybe it’s something else.

Liukas recommends nurturing your child’s problem solving skills by encouraging them to practice new skills and helping them find a project to work on.

Learning to rely on your own ability to solve problems is probably one of the most important attitudes I would take.

The second thing is repetition. Nobody anticipates being able to speak fluent French after attending a one-week workshop or even a six-month course. It’s a lifelong commitment to practice and learning. If that skill system sounds exhilarating, I would recommend finding a group of people who are also excited about learning how to program. For instance, the Ruby community is amazing in the sense that it arranges a lot of meetings and meet-ups—events where beginners are totally welcome to join.

So, first of all, being a problem solver, then finding a peer group of people who can help you. Third and fourth would be having a project that you’re really fascinated by and that forces you to learn. Choosing a problem that’s a problem in your life and figuring out how to solve it with programming, at least for me, has been one of the most effective ways to learn.

Liukas’ interviews are available in their entirety on Signal Tower and GeekDad.

Hello Ruby is a great book for parents looking to expose their 5-7 year olds to technology and coding concepts. Complement it with the resources on Liukas’ Hello Ruby website and with additional kid’s coding books.