“I have often been touched by the generosity I’ve witnessed in children and their willingness to share, even when it’s tough to do so. These selfless acts have a way of shaping lives.” 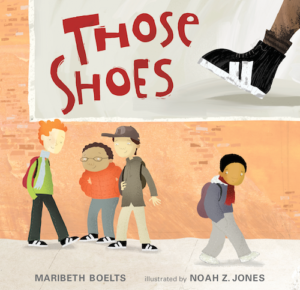 Globalization has brought with it many benefits, but freedom from advertising and consumerism isn’t one of them. In virtually every nation, childhood is becoming increasingly commercialized and commodified. Companies spend $17 billion dollars a year marketing to children, and the average American child watches an estimated 25,000 television commercials per year according to the FTC.

Those numbers have a big impact. The majority of children have seemingly insatiable appetites for toys, clothing, and other products designed for exclusively for kids. In fact, children influence up to $500 billion a year in family buying. According to Dan Cook, an assistant professor of advertising and sociology at the University of Illinois, the psychological effect is detrimental to children and parents alike.

What is most troubling is that children’s culture has become virtually indistinguishable from consumer culture over the course of the last century. The cultural marketplace is now a key arena for the formation of the sense of self and of peer relationships, so much so that parents often are stuck between giving into a kid’s purchase demands or risking their child becoming an outcast on the playground.

Kids’ consumer culture takes a most intimate thing — the realization and expression of self — and fuses it with a most distant system — the production of goods, services and media in an impersonal market.

Cumulatively, this fusion has been forged cohort by cohort and generation by generation over the twentieth century, making each of us a small conspirator in its reproduction. The process is so insidious that by the time a child gains the language and capacity to grasp what is occurring, his or her attention patterns, preferences, memories and aspirations cannot be neatly separated from the images and poetics of corporate strategy.

Author Maribeth Boelts and illustrator Noah Jones tackle this issue and others in Those Shoes (public library), a thought-provoking and heartwarming children’s book. In addition to consumerism, the story touches on many of the other big problems experienced by little people — stuff like bullying, peer pressure, and poverty — while also serving as a poignant reminder that children are capable of incredible acts of kindness and generosity in the face of overwhelming social pressure. The result is an unforgettable lesson in empathy, perseverance, and compassion.

The story starts with the hero, a boy named Jeremy, dreaming about some expensive shoes.

I have dreams about those shoes. Black high-tops. Two white stripes.

‘There’s no room for want around here — just need,’ Grandma says. ‘And what you need are new boots for winter.’ 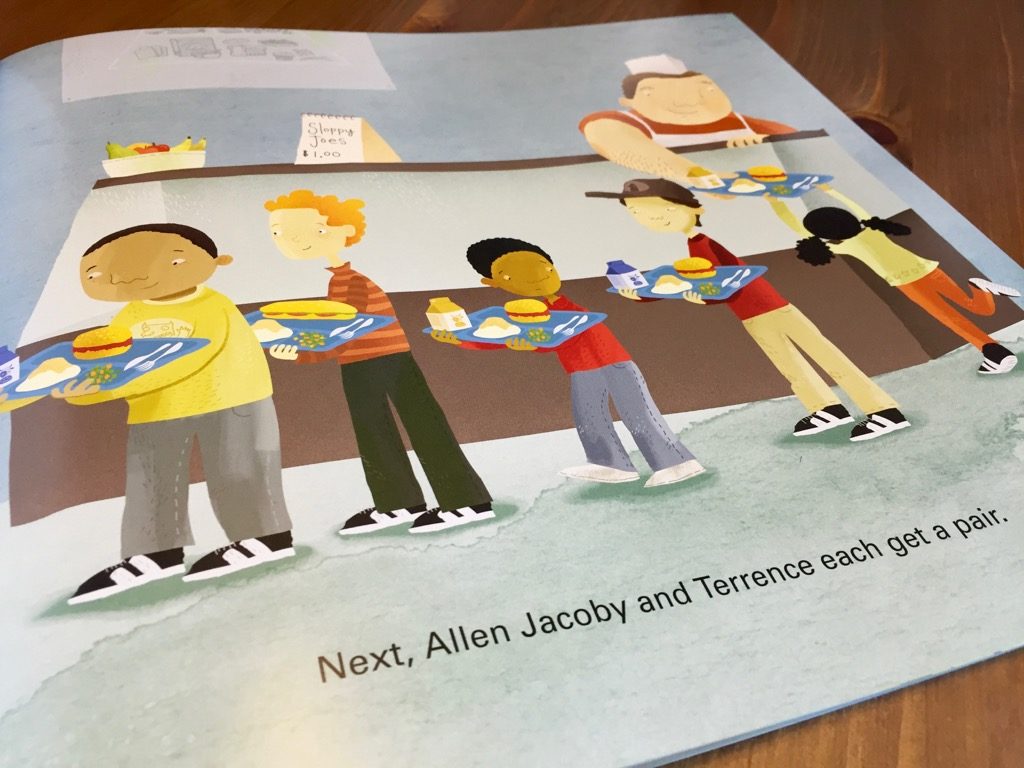 Of course, it seems like virtually everyone else in school has “those shoes,” except for Jeremy. When his shoes fall apart during a kickball game, Mr. Alfrey, the guidance counselor, helps him find a new pair in “the box of shoes and other stuff he has for kids who need things.” When he walks into the classroom wearing them, the entire class laughs at him.

When I come back to the classroom, Allen Jacoby takes one look at my Mr. Alfrey shoes and laughs, and so do Terrence, Brandon T., and everyone else. They only kid not laughing is Antonio Parker. At home, Grandma says, “How kind of Mr. Alfrey.” I nod and turn my back. I’m not going to cry about any dumb shoes. 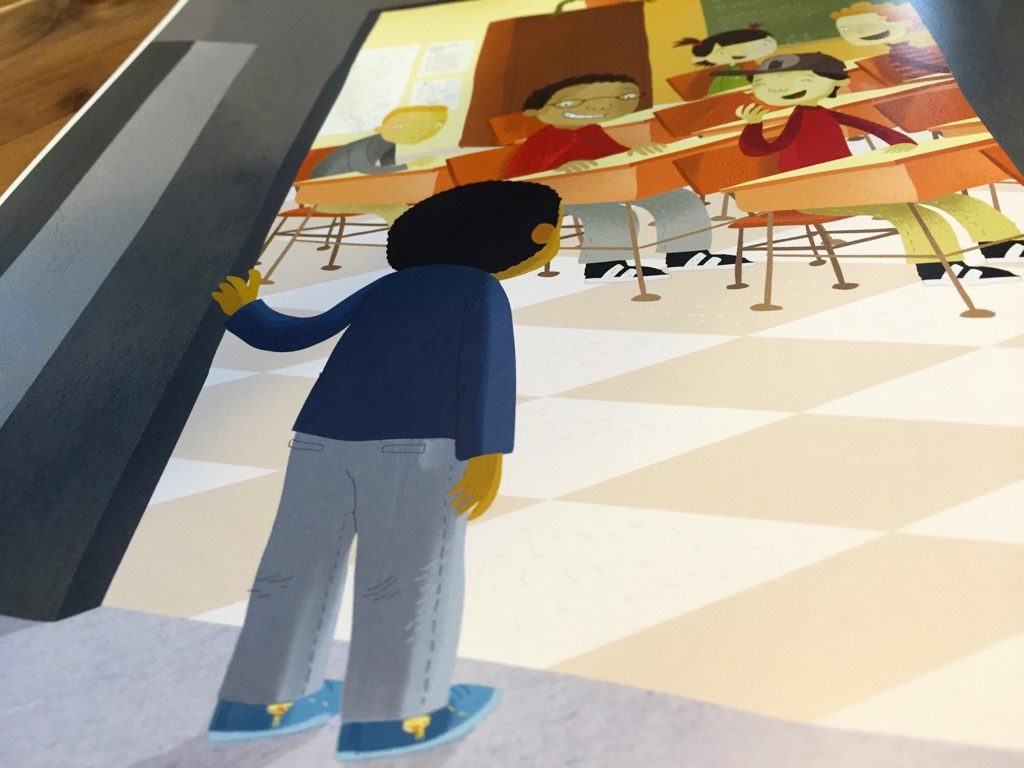 On Saturday, Jeremy learns that Grandma has saved a bit of money and might be able to buy him the shoes. But the shoes are too expensive. They find a pair used at a thrift store, but they’re too small for Jeremy’s feet. Jeremy buys them with his own money anyway. 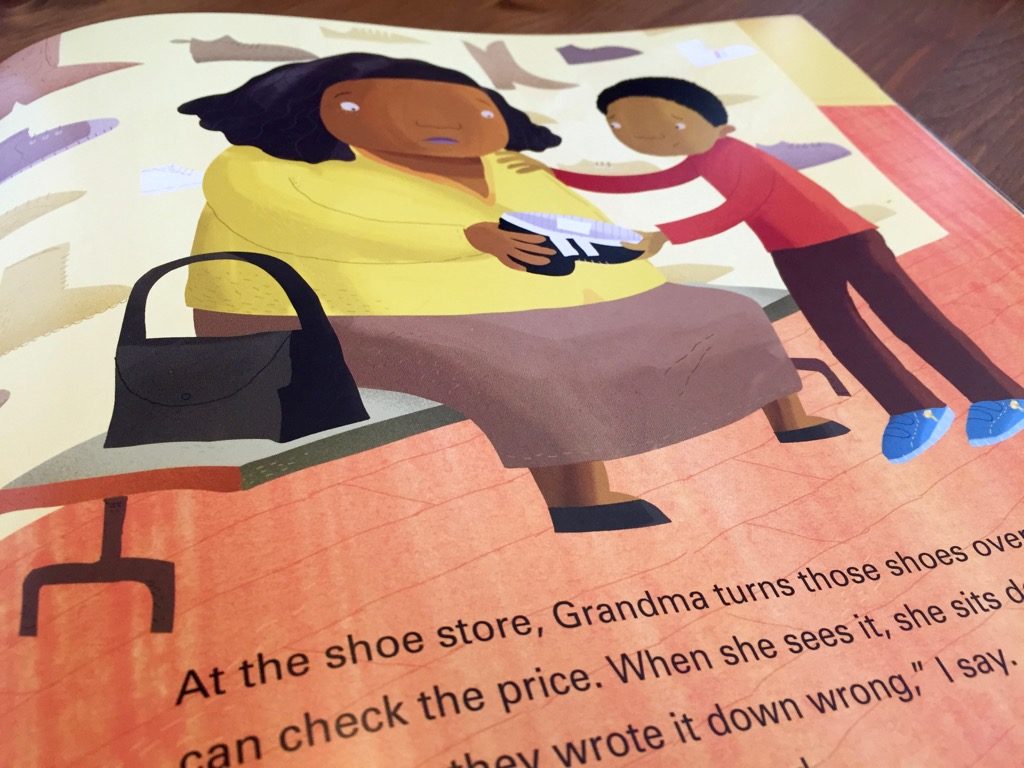 That night, I am awake for a long time thinking about Antonio. When morning comes, I try on my shoes one last time. Before I can change my mind, the shoes are in my coat. Snow is beginning to fall as I run across the street to Antonio’s apartment. I put the shoes in front of his door, push the doorbell—and run. 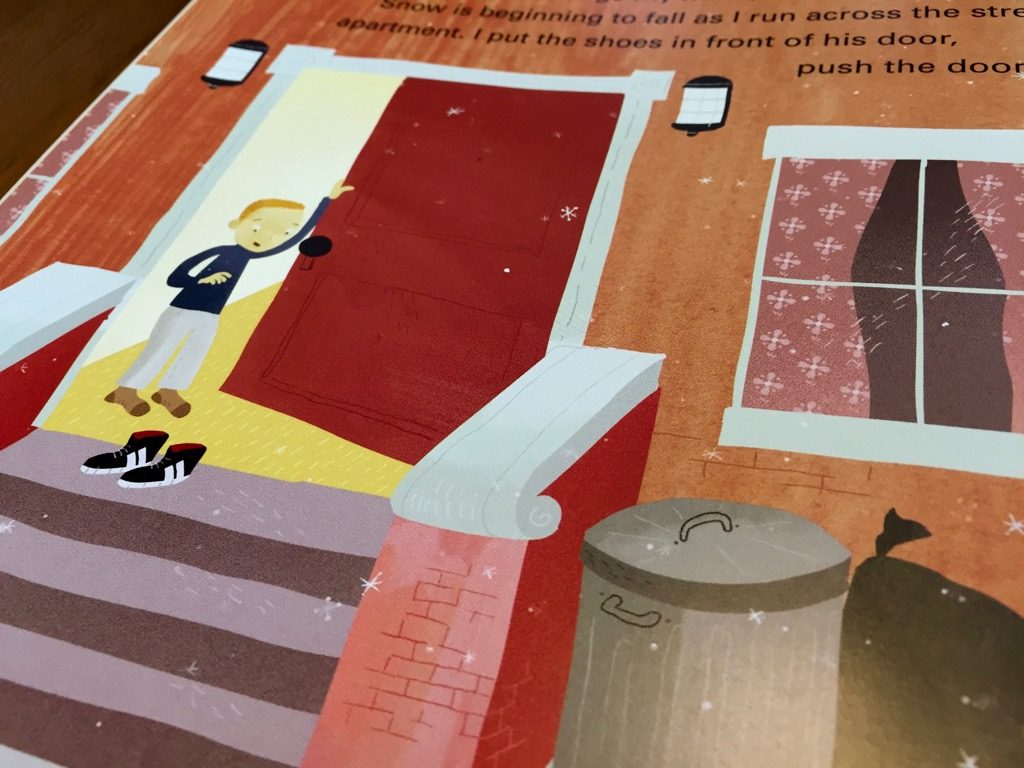 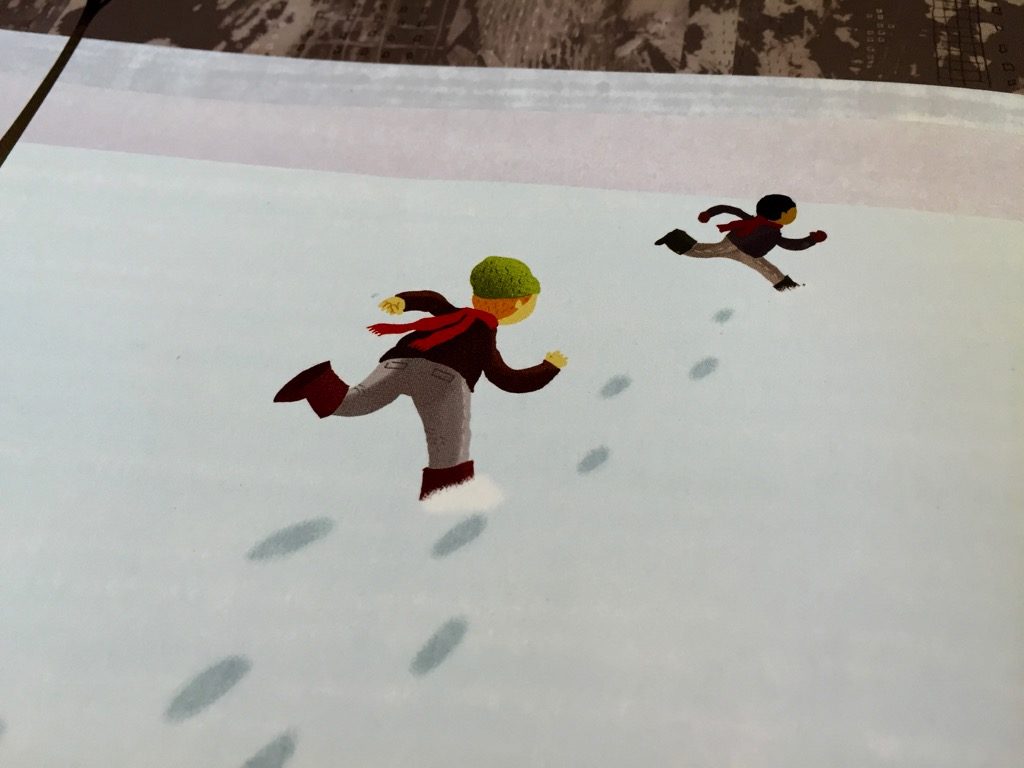 The story ends with Antonio thanking Jeremy, and the two of them running through the snow in their new boots.

Boelts, a former preschool teacher, says that the story was inspired by the kids she worked with. “I have often been touched by the generosity I’ve witnessed in children and their willingness to share, even when it’s tough to do so,” she said. “These selfless acts have a way of shaping lives.” Jones, the illustrator, says that he can identify with the main character. “I know exactly how Jeremy feels in this book, wanting something so badly it becomes all-consuming,” he said. “In my case it was probably a new, crazy action figure with ‘kung fu’ grip.”

Advertising, peer pressure, and consumerism pose real threats to children, but parents can help. Those Shoes is a deeply moving children’s story that delivers a powerful lesson of empathy and compassion. Complement it with Last Stop on Market Street, a Caldecott Honor Book about a boy who takes a bus ride through the inner city with his grandmother.