“Mistakes aren’t a necessary evil. They aren’t evil at all. They are an inevitable consequence of doing something new.” 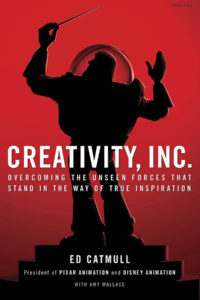 Mistakes are probably not the first thing that come to mind when you think of Pixar Animation Studios, the birthplace of blockbuster movies like Toy Story, Finding Nemo, and Cars. But according to Ed Catmull, the President of Pixar Animation, mistakes and failures are essential to Pixar’s continued success. In Creativity, Inc. (public library), Catmull shares his views on mistakes and reveals how Pixar as an organization embraces failure as an integral part of the creative process. Catmull’s insights also provide valuable clues for parents hoping to teach their children that mistakes are a natural part of learning — not something to fear.

Catmull is not the first high-profile executive to advocate for mistakes. Edwin Land, the cofounder of the Polaroid Corporation, was fond of saying that “a mistake is an event, the full benefit of which has not yet been turned to your advantage.” Catmull shares that sentiment.

In Creativity, Inc., he notes that Pixar experienced “a major meltdown” on every one of its first eleven films. He doesn’t view that as a bad thing. “We were able to treat them as learning experiences,” he said. “Yes, they were painful, but we emerged better and stronger because of them. I came to think of our meltdowns as a necessary part of doing our business.”

According to Catmull, most people acquire their fear of failure early in life. This irrational fear can have disastrous consequences, both personally and professionally.

For most us, failure comes with baggage — a lot of baggage — that I believe is traced directly back to our days in school. From a very early age, the message is drilled into our heads: Failure is bad; failure means you didn’t study or prepare; failure means you slacked off or — worse! — aren’t smart enough to begin with. Thus, failure is something to be ashamed of. This perception lives on long into adulthood, even in people who have learned to parrot the oft-repeated arguments about the upside of failure. How many articles have you read on that topic alone? And yet, even as they nod their heads in agreement, many readers of those articles still have the emotional reaction that they had as children. They just can’t help it: That early experience of shame is too deep-seated to erase. All the time in my work, I see people resist and reject failure and try mightily to avoid it, because regardless of what we say, mistakes feel embarrassing. There is a visceral reaction to failure: It hurts.

We need to think about failure differently. I’m not the first to say that failure, when approached properly, can be an opportunity for growth. But the way most people interpret this assertion is that mistakes are a necessary evil. Mistakes aren’t a necessary evil. They aren’t evil at all. They are an inevitable consequence of doing something new (and, as such, should be seen as valuable; without them, we’d have no originality.) And yet, even as I say that embracing failure is an important part of learning, I also acknowledge that acknowledging this truth is not enough. That’s because failure is painful, and our feelings about this pain tend to screw up our understanding of its worth. To disentangle the good and the bad parts of failure, we have to recognize both the reality of the pain and the benefit of the resulting growth.

Catmull says that we avoid failure at our own peril. Mistakes are essential for learning at all ages, as anyone who has learned to ride a bike can testify.

Left to their own devices, most people don’t want to fail. But Andrew Stanton isn’t most people… He’s known about Pixar for repeating the phrases “fail early and fail fast” and “be wrong as fast as you can.” He thinks of failure like learning to ride a bike; it isn’t conceivable that you would learn to do this without making mistakes — without toppling over a few times. “Get a bike that’s as low to the ground as you can find, put on elbow and knee pads so you’re not afraid of falling, and go,” he says. If you apply this mindset to everything new you attempt, you can begin to subvert the negative connotation associated with making mistakes. Says Andrew: “You wouldn’t say to somebody who is first learning to play the guitar, ‘You better think really hard about where you put your fingers on the guitar neck before you strum, because you only get to strum once, and that’s it. And if you get that wrong, we’re going to move on.’ That’s no way to learn, is it?”

Even though people in our offices have heard Andrew say this repeatedly, many still miss the point. They think it means accept failure with dignity and move on. The better, more subtle interpretation is that failure is a manifestation of learning and exploration. If you aren’t experiencing failure, then you are making a far worse mistake: You are being driven by the desire to avoid it. And, for leaders especially, this strategy — trying to avoid failure by outthinking it — dooms you to fail.

Creativity, Inc. provides valuable management advice and remarkable insight into the inner workings of one of the world’s greatest animation studios. But Catmull is more than just another skilled manager — he’s a parent, and the book has some important lessons about how early education can have a long-term impact on children’s lives. In that sense, Creativity, Inc. is a worthwhile addition to any parent’s bookshelf. Complement with Hello Ruby, a book that teaches the basics of computational learning and reassures children that it’s okay to make mistakes.