“Everything you want out of life is in that huge, bubbling vat of failure. The trick is to get the good stuff out.” 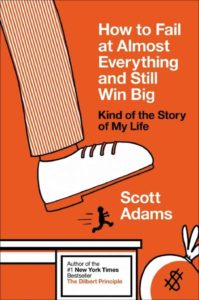 “Mistakes aren’t a necessary evil. They aren’t evil at all,” Ed Catmull mused in his timeless discussion about mistakes and why children need to be allowed to fail. “Failure is a manifestation of learning and exploration,” he said. But as it turns out, failure is necessary for more than just personal growth — it’s also a prerequisite for success.

Scott Adams, the creator of the Dilbert comic strip, says he “failed at more challenges than anyone I know.” In How to Fail at Almost Everything and Still Win Big (public library), Adams shares how he endured and embraced innumerable failures before eventually becoming successful beyond his wildest dreams. His advice is required reading for young adults hoping to improve their career prospects.

“Everything you want out of life is in that huge, bubbling vat of failure,” says Adams in the book. “The trick is to get the good stuff out.” To fail towards success, as Adams calls it, young adults first need to learn the systems and practices of successful people. But that’s easier said than done, especially since potential paths to success are rarely taught in school.

The primary purpose of schools is to prepare kids for success in adulthood. That’s why it seems odd to me that schools don’t have required courses on the systems and practices of successful people. Success isn’t magic; it’s generally the product of picking a good system and following it until luck finds you. Unfortunately, schools barely have the resources to teach basic course work. Students are on their own to figure out the best systems for success.

If we can’t count on schools to teach kids the systems of success, how will people learn those important skills? The children of successful people probably learn by observation and parental coaching. But most people are not born to highly successful parents. The average kid spends almost no time around highly successful people, and certainly not during the workday, when those successful people are applying their methods. The young are intentionally insulated from the adult world of work. At best, kids see the television and movie versions of how to succeed, and that isn’t much help.

How can young adults learn about systems of success? Adams recommends reading books written by highly successful people. But he has his own personal formula for success that revolves around the acquisition and application of skills. That’s what he recommends young adults focus on: acquiring skills that they can use in a variety of circumstances.

When I speak to young people on the topic of success, as I often do, I tell them there’s a formula for it. You can manipulate your odds of success by how you choose to fill out the variables in the formula. The formula, roughly speaking, is that every skill you acquire doubles your odds of success.

Notice I didn’t say anything about the level of proficiency you need to achieve for each skill. I didn’t mention anything about excellence or being world-class. The idea is that you can raise your market value by being merely good — not extraordinary — at more than one skill… To put the success formula into its simplest form:

Adams admits that his advice is a simplification, but he argues it’s necessary to trick your brain into proactively wanting to acquire more skills.

When I say each skill you acquire will double your odds of success, that’s a useful simplification. Obviously some skills are more valuable than others, and the twelfth skill you acquire might have less value than each of the first eleven. But if you think of each skill in terms of doubling your chances of success, it will steer your actions more effectively than if you assume the benefit of learning a new skill will get lost in the rounding. Logically, you might think it would make more sense to have either an accurate formula for success or none at all. But that’s not how our brains are wired. Sometimes an entirely inaccurate formula is a handy way to move you in the right direction if it offers the benefit of simplicity.

If I told you that taking a class in website design during your evenings might double your odds of career success, the thought would increase the odds that you would act. If instead I only offered you a vague opinion that acquiring new skills is beneficial, you wouldn’t feel particularly motivated. When you accept without necessarily believing that each new skill doubles your odds of success, you effectively hack (trick) your brain to be more proactive in your pursuit of success. Looking at the familiar in new ways can change your behavior even when the new point of view focuses on the imaginary.

The goal, according to Adams, is to have skills that you can assemble when applying for a job, starting a business, or doing virtually anything else. That’s what Adams did when he created his Dilbert comic strip.

I’m a perfect example of the power of leveraging multiple mediocre skills. I’m a rich and famous cartoonist who doesn’t draw well. At social gatherings I’m usually not the funniest person in the room. My writing skills are good, not great. But what I have that most artists and cartoonists do not have is years of corporate business experience plus an MBA from Berkeley’s Haas School of Business. In the early years of Dilbert my business experience served as the fodder for the comic. Eventually I discovered that my business skills were essential in navigating Dilbert from a cult hit to a household name. My combined mediocre skills are worth far more than the sum of the parts. If you think extraordinary talent and a maniacal pursuit of excellence are necessary for success, I say that’s just one approach, and probably the hardest. When it comes to skills, quantity often beats quality.

How to Fail at Almost Everything and Still Win Big is a great read for young adults who are thinking about their future career prospects. It’s clear that Scott Adams learned a lot from his failures, and his advice about acquiring skills is invaluable for readers who are just getting started professionally. Complement with iWoz, a book that contains Apple cofounder Steve Wozniak’s advice for kids interested in technology.