“I ate the gruel and I ate the pot, too. And now I am going to also eat YOU.” 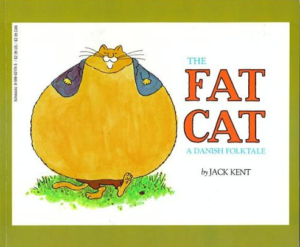 “Greedy folk have long arms,” posits the old English proverb. That’s the figurative and disturbing truth presented in The Fat Cat (public library), a children’s book by author and illustrator Jack Kent about a greedy cat with an insatiable appetite. Based on a Danish folktale, Kent’s book follows the cat’s wholly unforgettable journey as he consumes everything and everyone in his path. It’s an engrossing experience for children and adults alike.

The story starts in an old woman’s house. The cat, curled up on the chair, watches a pot of gruel for the old woman while she runs an errand. From there, things get progressively stranger.

There was once an old woman who was cooking some gruel. She had some business with a neighbor woman and asked the cat if he would look after the gruel while she was gone. ‘I’ll be glad to,’ said the cat.

But when the old woman had gone, the gruel looked so good that the cat ate it all. And the pot, too.

When the old woman came back, she said to the cat, ‘Now what has happened to the gruel?’ 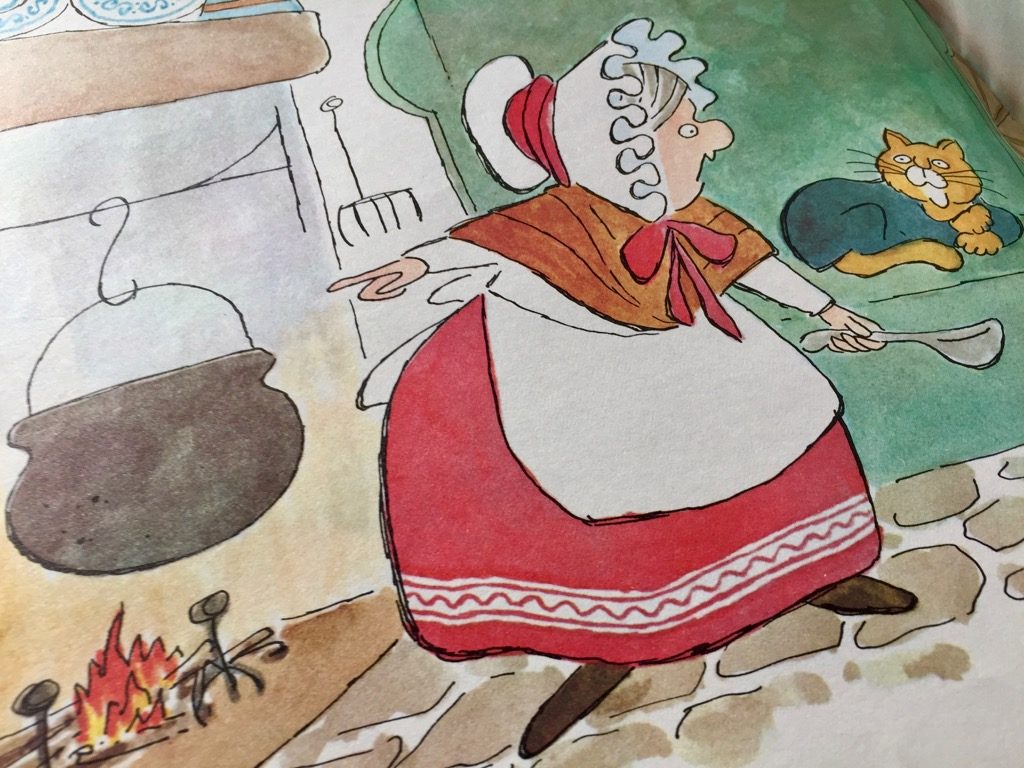 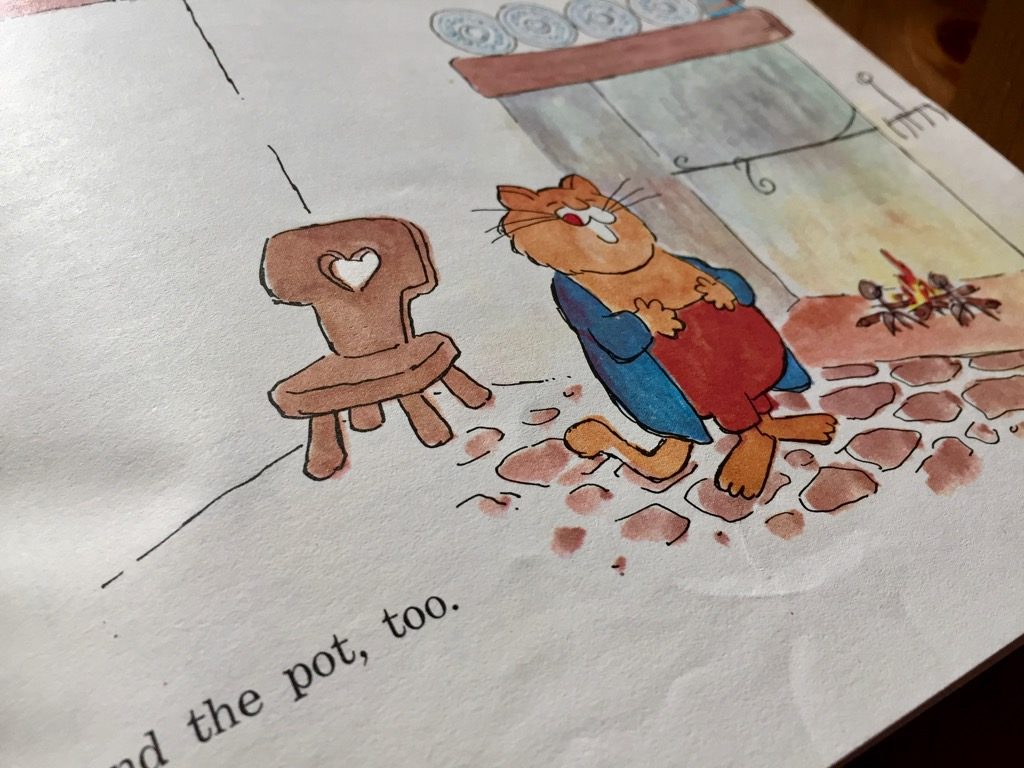 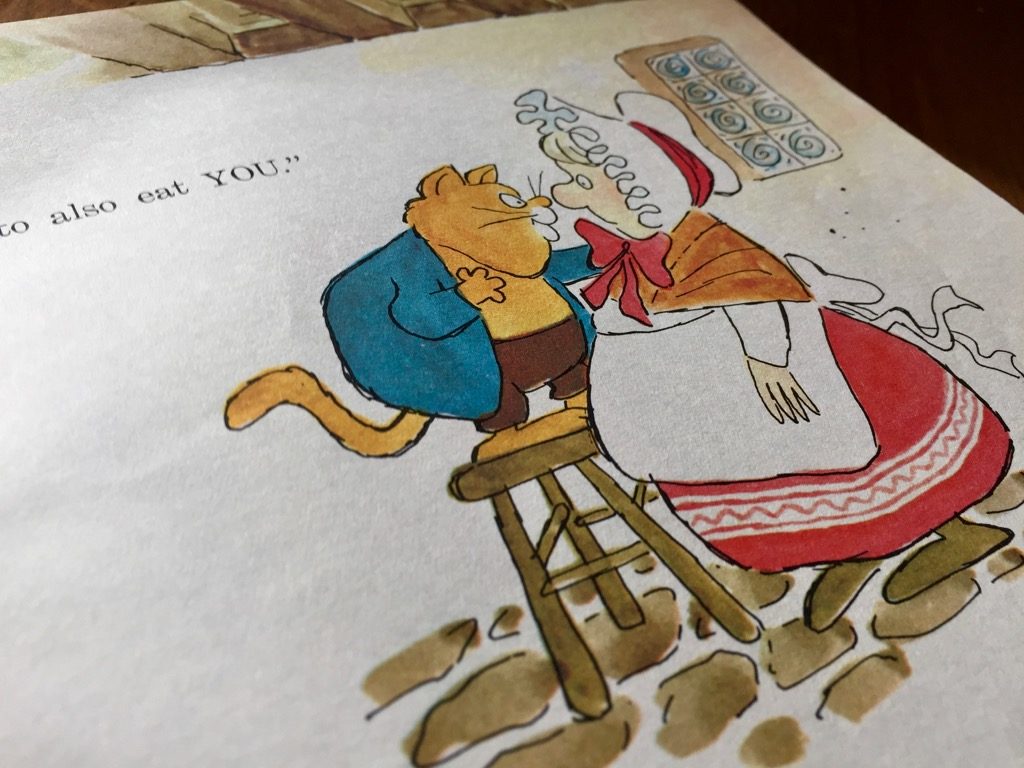 After eating the old woman, the cat leaves the house and starts walking around. He meets a number of neighbors and animals and devours them all. Suffice it to say that The Fat Cat is hilarious and slightly morbid at the same time. The events certainly capture and hold children’s attention!

Later he met seven girls dancing. And they, too, said to him, ‘Gracious! What have you been eating, my little cat? You are so fat.’

And the cat said, ‘I ate the gruel and the pot and the old woman, too, and Skohottentot and Skolinkenlot and five birds in a flock. And now I am going to also eat YOU.’

And he ate the seven girls dancing. 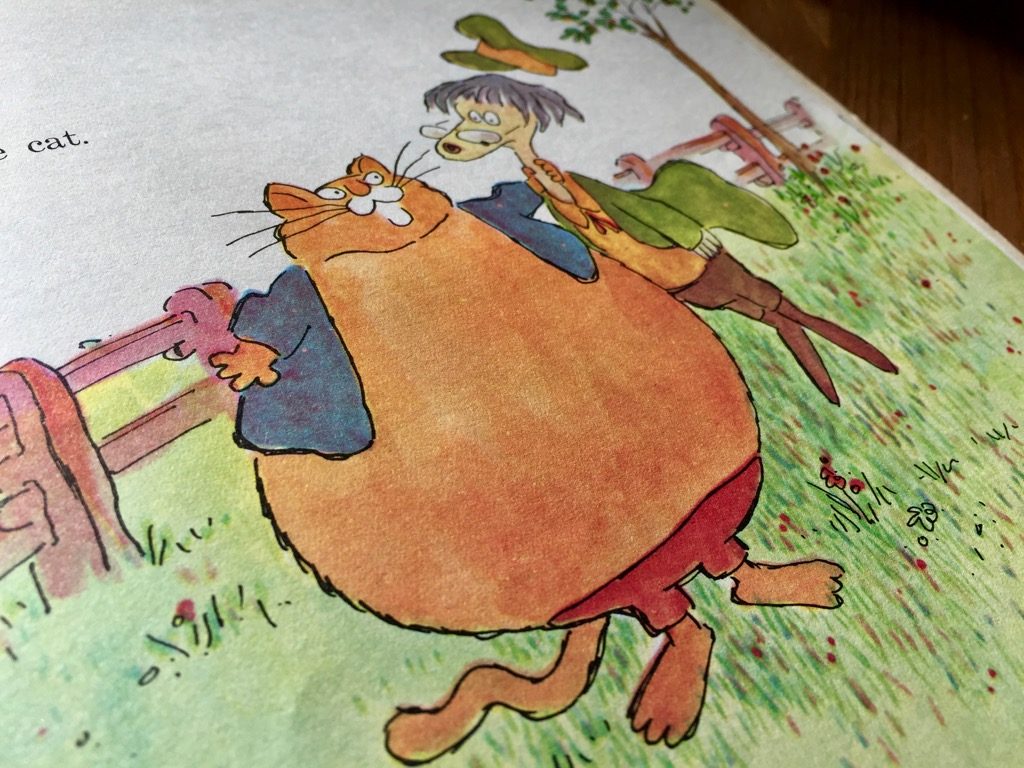 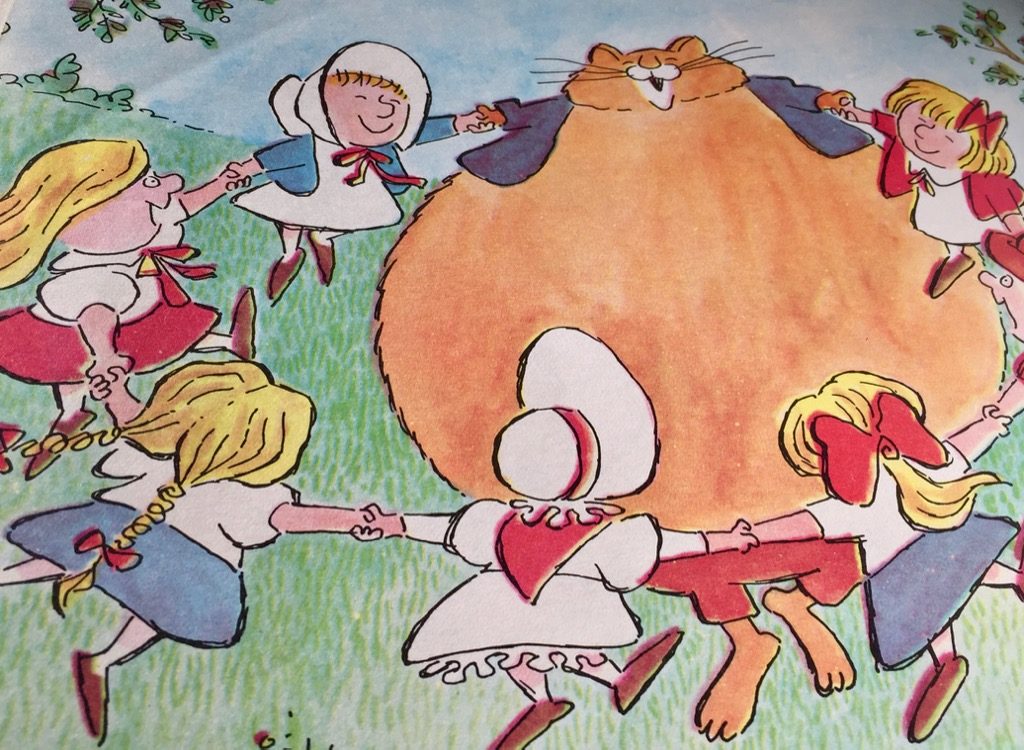 Eventually the cat meets a woodcutter with an ax. The man cuts open the cat and saves the lives of everyone who had been eaten by the cat. The old woman takes her gruel and hurries home. On the last page of the story, the cat is shown looking dazed and confused while the woodcutter tapes his wound. 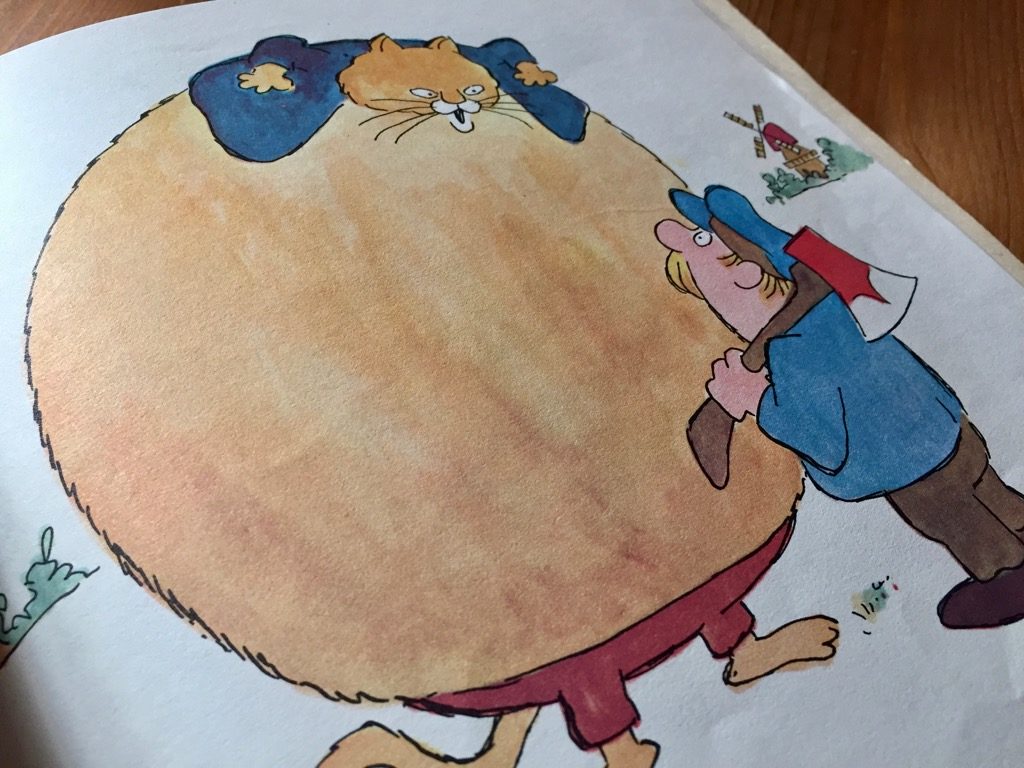 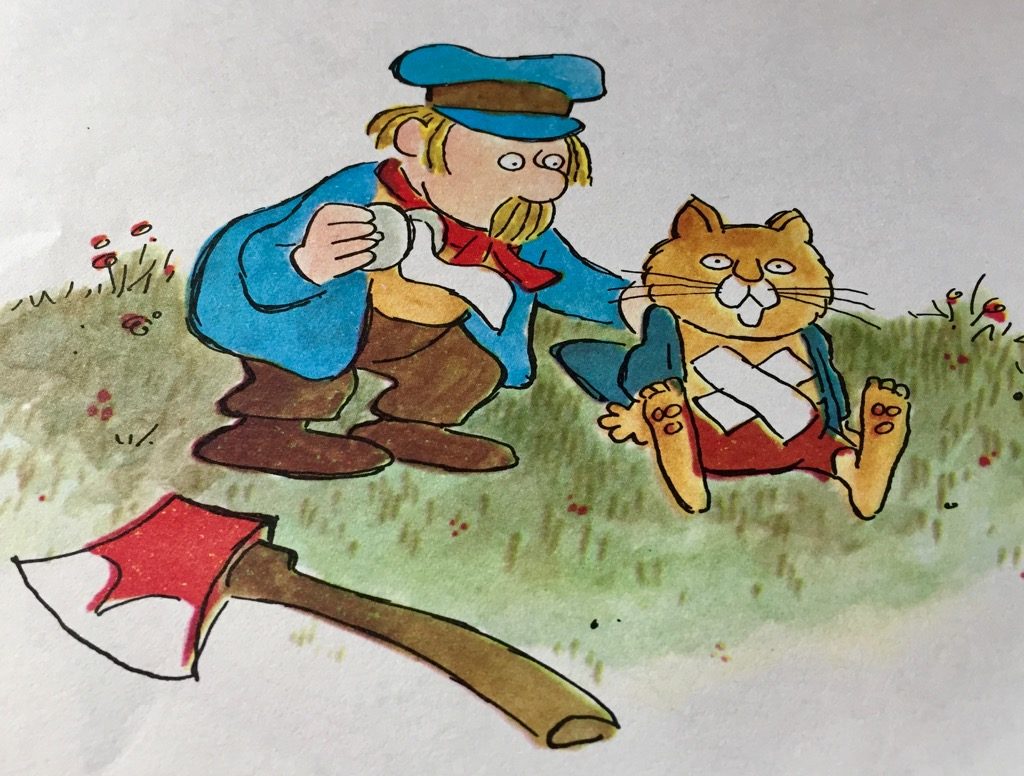 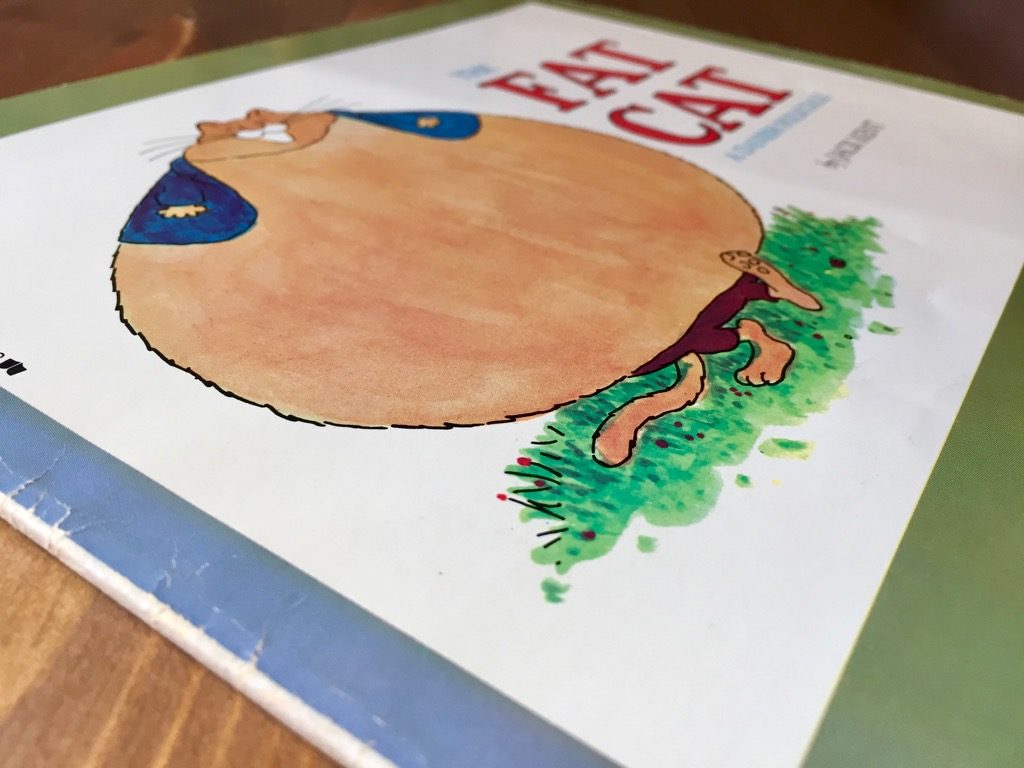 The story’s apparent lesson — that greed and overindulgence can adversely affect you and those around you — is similar to the advice that Joseph Wood Krutch delivered to young adults in a commencement speech at the University of Arizona:

The Fat Cat is a timeless story, one that teaches children about the dangers of greed and overindulgence. Sadly, the book is currently out of print, but those lucky enough to find this book used will undoubtedly enjoy it for years to come. Complement with Rude Cakes, a hilarious children’s book that uses humor to talk about bad behavior, and Gossie, a story about a gosling who likes to wear bright red boots.