“I’m living proof that as long as you work hard, you can make your dreams take flight.” 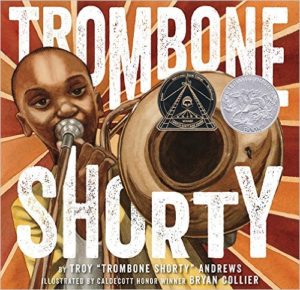 Trombone Shorty (public library) breaks the mold in spectacular fashion. This award-winning book is an autobiographical portrait of author Troy “Trombone Shorty” Andrews’ life as a child growing up in the New Orleans neighborhood of Tremé. Surrounded by music and musicians, but poor and with no real instruments of their own, Troy and his friends form a band and start playing instruments they make themselves. That is, until the hero of the story finds a broken trombone.

Then one day I found a broken trombone that looked too beaten up to make music anymore. It didn’t sound perfect, but finally with a real instrument in my hand, I was ready to play. The next time the parade went by my house, I grabbed that trombone and headed out into the street. My brother James noticed me playing along and smiled proudly. “Trombone Shorty!” he called out, because the instrument was twice my size!

Illustrator Bryan Collier filled the book with artwork that’s tough and uncompromising. The eye-popping combination of pen, watercolor, and collage is both realistic and a little startling. Taken collectively, the story and the artwork really capture the unique feel of New Orleans and its jazz music. 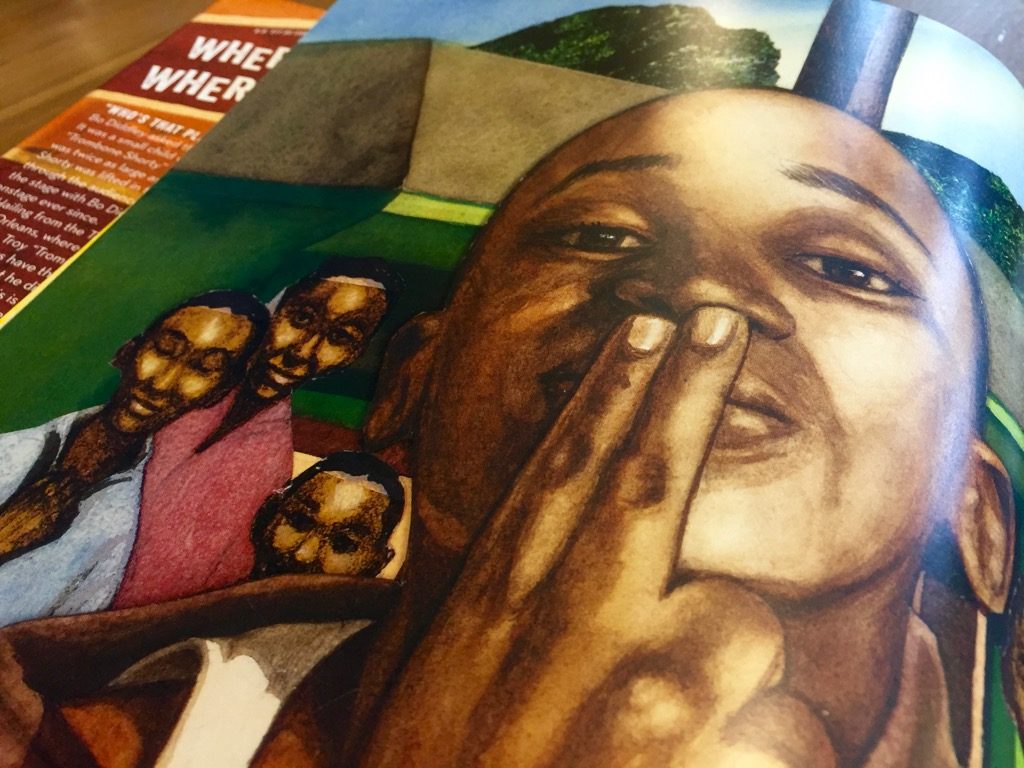 Trombone Shorty practices his trombone until he’s mastered the instrument.

From that day on, everyone called me Trombone Shorty! I took that trombone everywhere I went and never stopped playing. I was so small that sometimes I fell right over to the ground because it was so heavy. But I always got back up, and I learned to hold it up high.

In the author’s note at the end of the book, he says that “the only reason I succeeded as a musician was because I practiced every day.” Readers learn that the grown-up Trombone Shorty has played music for President Barack Obama at the White House and performed with artists like Lenny Kravitz, U2, Green Day, Eric Clapton, and B.B. King. 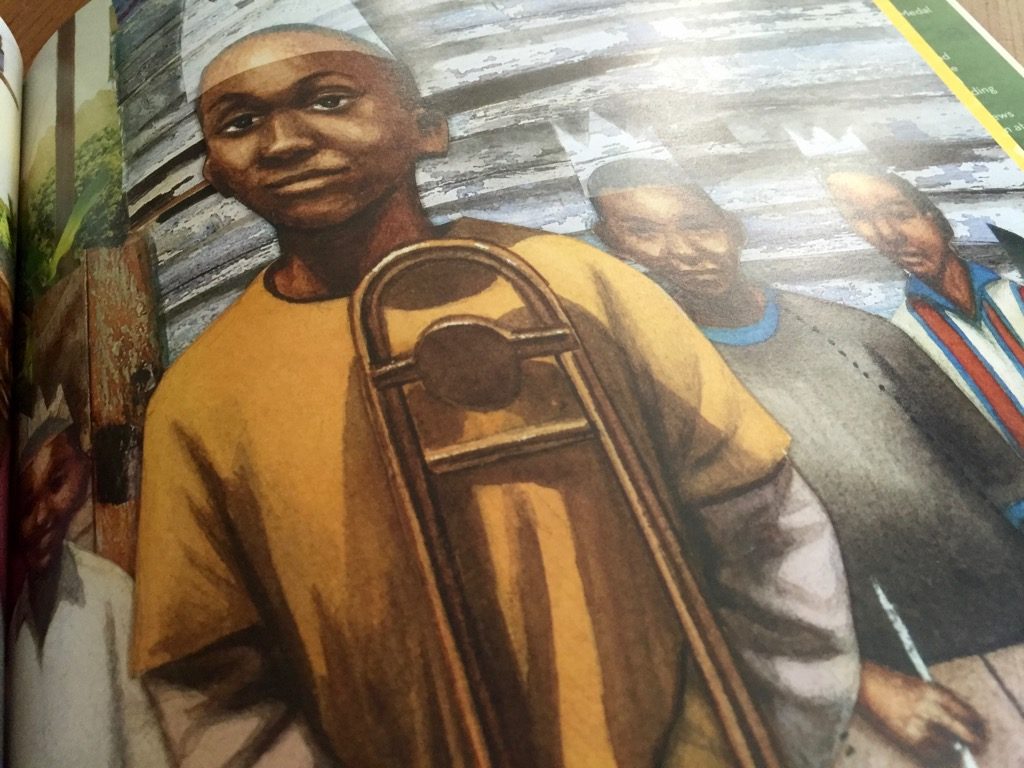 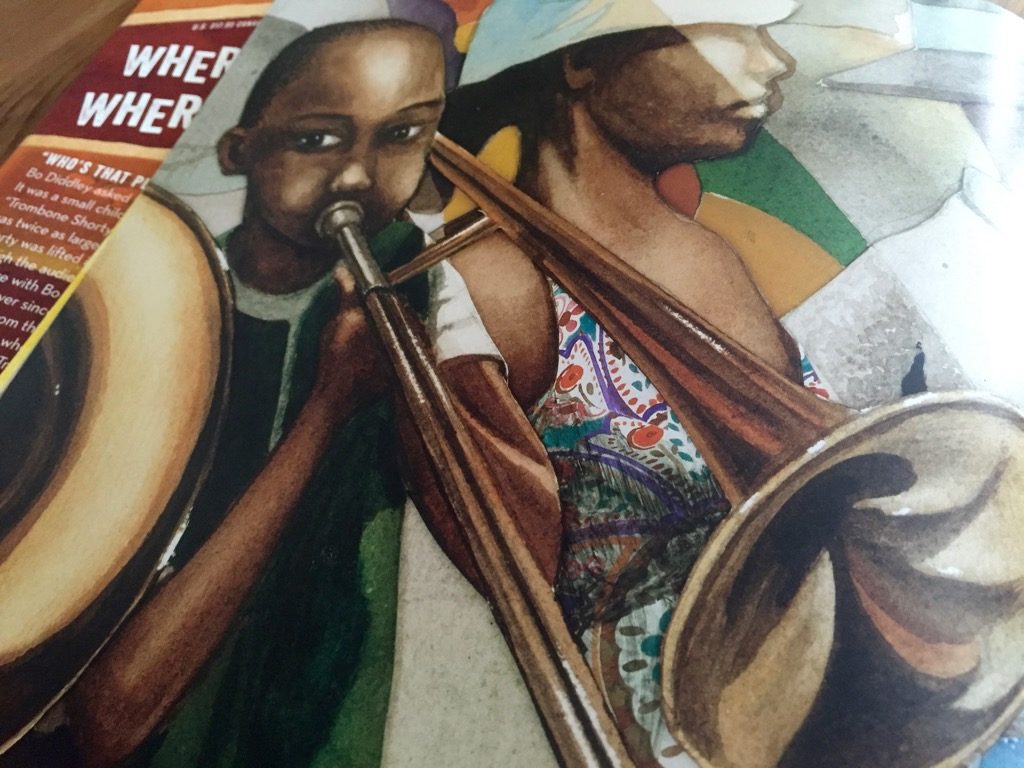 One of the most exciting parts of the story is when Trombone Shorty gets invited onstage to play with the great musician Bo Diddley.

One day my mom surprised me with tickets to the New Orleans Jazz & Heritage Festival, the best and biggest music festival in town. We went to see Bo Diddley, who my mom said was one of the most important musicians of all time. As I watched him onstage, I raised my trombone to my lips and started to play along. He stopped his band in the middle of the song and asked the crowd, ‘Who’s that playing out there?’

Everyone started pointing, but Bo Diddley couldn’t see me because I was the smallest one in the place! So my mom held me up in the air and said, ‘That’s my son, Trombone Shorty!’ 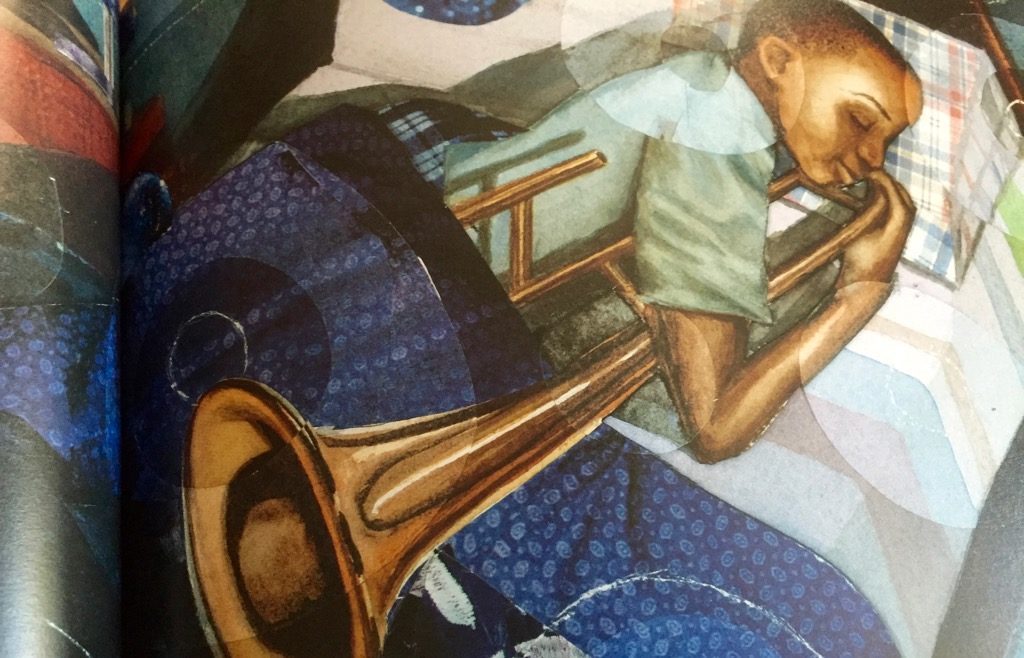 In real life, Trombone Shorty is now a famous musician who regularly tours with his band Orleans Avenue, but he’s never forgotten his roots. In the author’s note at the end of the book, he explains why he shared his story.

While I’ve been fortunate enough to travel the world and share my music, I always return home to New Orleans. Nothing has been more inspiring to me than working with the children there. I wanted to write this book to try to inspire hope in kids who might be growing up under difficult circumstances but who also have a dream, just like I did. I’m living proof that as long as you work hard, you can make your dreams take flight.

With the help of Tulane University, the author created the Trombone Shorty Foundation to help other children in New Orleans discover music. Please join us in making a donation.

Trombone Shorty won the Coretta Scott King Award and was named a Caldecott Honor Book. The book won’t revolutionize the white world of children’s literature all by itself, but it’s a step in the right direction. As author and illustrator Christopher Myers wrote in an essay, books like Trombone Shorty can change the world’s perception of African Americans.

The plethora of threatening images of young black people has real-life effects. But if people can see us as young dreamers, boys with hopes and doubts and playfulness … perhaps they will feel less inclined to kill us.

The beauty of Trombone Shorty is that it stands on its own merits. Forget the color of the author’s skin — the story is as incredible as it is inspiring. Heroes are heroes no matter what they look like. This is a wonderful book to share with kids interested in music and instruments. Complement it with Last Stop on Market Street, another book that prominently features children of color.